This is a proposal to add the ability to render vector field layers in MapServer. Vector fields are used for instance in meteorology to store/display wind direction and magnitude.

The source is two bands of raster data, one band represents the U component of the vector, and the 2nd band the V component. Using the u,v values at a given location we can compute a rotation and magnitude and use that to draw an arrow of a size proportional to the magnitude and pointing in the direction of the phenomenon (wind, current, etc.)

For more details about vector fields, refer to: http://en.wikipedia.org/wiki/Vector_field 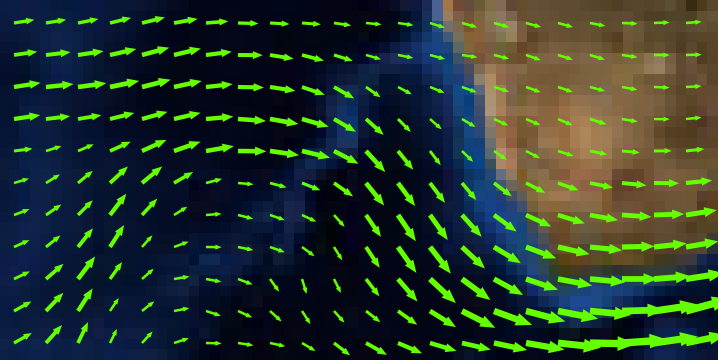 This RFC proposes the addition of a new type of layer in MapServer: CONNECTIONTYPE UVRASTER. The new type is a hybrid layer, which has a raster data source as input and vector features as output. Initially, only the point representation of those vector features will be supported. Also, queries won’t be supported in this phase.

Since the data source is a raster, all raster processing options can be used (e.g. RESAMPLE). After a few tests, we determined that the best results (for all different zoom levels) for vector fields were when using RESAMPLE=AVERAGE and this will be set by default for UV layers unless another type of resampling is explicitly specified in the layer definition.

To render a vector field layer, we need to define a layer in the mapfile with the following options:

The UVRASTER layer has 4 attribute bindings that can be used in the layer definition and/or class expressions:

Example of a layer definition:

Internally, a UVRASTER layer will have its own renderer/driver code. It’s a hybrid layer because it reads the raster source as a normal raster layer does, but all other functions behave like a vector layer. The layer can be drawn as a normal point layer using whichShape, GetShape etc.

The following files will be modified/created by this RFC:

No issue for any MapScript bindings. The UVRASTER layer is handled/rendered internally as any other layer..

This change provides a new functionality with no backwards compatibility issues being considered.